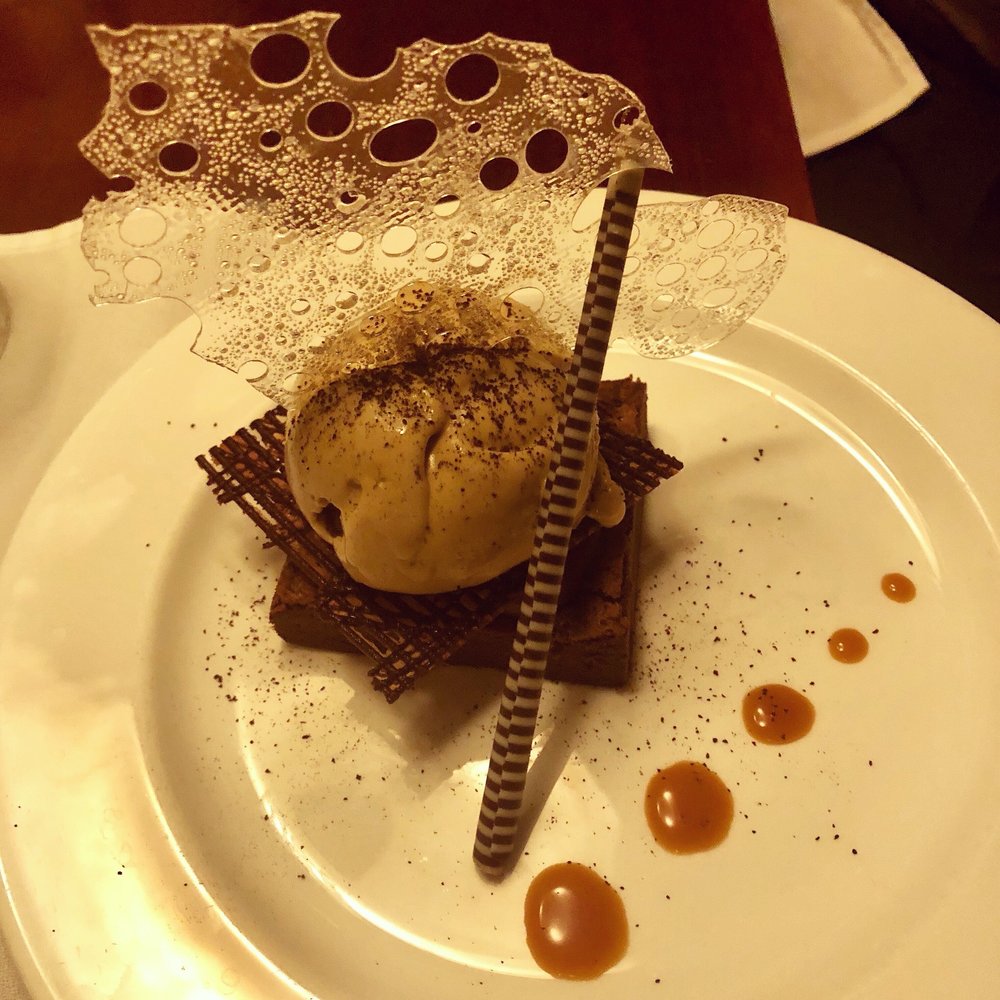 Is Berns Steakhouse the best in America?

There is a reason this place is consistently on the top 10 steak houses’ in America list. Berns Steakhouse was interesting, traditional, and satisfied many different senses.

When I was a child my father took me to Peter Luger’s steakhouse in Brooklyn once. Literally once. And we had to go somewhere in the window of 11pm because there were no other available reservations. For many years I thought back on that meal. The steak was fantastic, the creamed spinach was the best side dish I had ever eaten, just knowing that we were there in itself was incredible. I couldn’t ever fathom any steak house I would attend after would measure up.

Bern’s in Tampa, Florida is quite simply put in my opinion the best place to get a steak in this country. There are many facets of dining somewhere that need to be taken into consideration when making such a bold claim.

The Berns’ Pillars of Success

Atmosphere – Bern’s is a very interesting location. When you first walk into Bern’s you honestly get a “Where the heck am I?” feeling right off the bat. Very dimly lit with many red bulbs over some forms of art that would be considered unique to most people. Many paintings, statues, and furniture that set a mood instantly. You are soon after taken to your table which could be set in any of many different dining rooms. Depending on where you’re sat, depends on the next type of setting. Some rooms look like very well lit, fancy dining rooms while others are also set a bit darker. Some have many forms of art while others are a bit more plain. Would I say there are any rooms or seats that are considered better than others? Not necessarily. It is so funny how both Bern’s as well as Commander’s Palace are considered higher end restaurants but how different they were.

Service – All of the service staff is dressed to impress at Bern’s. The bus staff being the “least” dressed staff are still wearing button down shirts and black dress slacks. Table servers are wearing suits and the members of management are wearing even nicer Both times dining at Bern’s our server’s were very good at their job, but our first time he was definitely a step above. Service staff here has perfected the art of making serving tables a sustainable career. All of Bern’s servers go through a rigorous training protocol before they’re allowed to take their own tables that even includes working shifts on Bern’s farm that they source a lot of their vegetables from. Our server gave us a nearly 10 minute tutorial on how to make the Caesar dressing and build the salad at Bern’s prior to serving it to us. I was very impressed not only with our server, but by the amount of management staff on the floor making sure that everything was running smoothly.

Beverages – Won’t spend too much time on this but you can get anything from extremely expensive bottles of wine to can’s/bottles of some really good quality craft style beer as well as regular domestics. I tried a new craft beer from the United Kingdom called Young’s Double Chocolate Stout and I was very impressed with it. I am a big fan of stout’s and porter’s so it was nice to be able to try a new one while enjoying a great meal. Bern’s wine cellar has over 6,800 unique labels and is home to the largest collection in the United States. They also offer over 200 wines by the glass.

Appetizers – Bern’s is a steak house and they are obviously very well known for their entree’s and particularly their steak options. With that being said, the item that made me the happiest and honestly was the most pleasing to me was the Steak tartare. Firstly, it’s nearly impossible to find anywhere that is still serving tartare. Secondly, when you do it is usually somewhere you aren’t 100% certain you trust serving you tartare. Lastly, this was by far the best tartare I’ve ever had. There are multiple variations and on our two trips we tried the original tartare as well as the golden variety (Dijon and grain mustard’s folded in) and I was genuinely blown away by both. The complexity of something so basic is really something to be celebrated. The blending of flavors that is coming from eating raw beef is truly astonishing and paired with the homemade toast from Bern’s is truly an incredible 1-2 punch.

After I had the best appetizer of my life, they brought over Bern’s French Onion soup. I don’t throw big phrases around when dealing with culinary often. It’s rare I say it was the best, that I’ve never had better, that I’d consider murder to consume again…Bern’s French onion soup fits all 3 of those statements, and I still feel as though I haven’t said enough. The flavor in this broth is super concentrated and crafted with a steady hand. I believe that rather than a standard beef stock there must be veal stock in this. It is also extremely velvety leading me to believe it is mounted with butter. The toast has been seasoned itself as well and you can tell the difference in flavor with as well as without it when taking separate bites. The multiple cheeses give a nice mouthfeel as well as differential of taste. It’s just….wow. Once the French onion phase was complete, our server brought out a large wooden bowl with 4 ounce soufflé cups of various items and began to build our Caesar salads. He had whole anchovy filets that he then used multiple knives to break down until it was a puree in the bowl. He hand squeezed the lemon and combined all the ingredients prior to adding the freshly chopped romaine and tossing in the air a few times to coat everything. At the end of the day was this just a Caesar salad? Yes, of course. However…it was an incredibly tasty Caesar dressing and I really enjoyed the flair and “lesson” presented while doing so.

Entree – It’s kind of hard not to get lost on this menu (it is HUGE) with so many appealing sounding options to choose from. We decided to order the large Chateaubriand and split it. Luckily I was not dining with uncultured swine and we ordered it cooked medium rare. The sides that come with the dish are a potato that you can choose toppings for (naturally I said load that sucker up), fresh fried onions, and carrots that have been cooked down with almonds, butter, and I believe either grand marnier or Cointreau. To say this steak was heavenly would be an understatement. You could have cut this filet up with a butter knife and you barely had to chew this meat, it was melting in my mouth. The sides were all also delicious in their own right, but this cut of meat was by far the most palatable Chateaubriand I have ever had and probably the best steak in general. I typically prefer the fattier cuts like Rib-eye but this was truly fantastic.

Dessert – So Bern’s does dessert a little different than you’re used to. Firstly, when your entrée is complete you then pay your bill to end your meal there. If you so choose, you then take a tour of the kitchen as well as the famed wine cellar that is home to the largest collection in America. You then begin part two of your journey on the 2nd floor. Bern’s has a floor entirely dedicated to dessert. Different service staff, different kitchen staff, different bartenders…the whole floor runs as a separate restaurant. This list of selections luckily is a bit more modest which allows for slightly easier choice of sweet tooth cravings, but this is by no means a small menu. My favorite item after multiple times visiting this room is probably not what you would expect. There is no better way to describe this item than the fine people at Bern’s already have on their menu so I will take an excerpt from there.

This long-time specialty features a marriage of our very-finely-ground, freshly-roasted coffee marinated in Kahlúa and flavored liqueurs for an average of ten weeks. Your cappuccino is topped with a float of vanilla cream and finely-ground coffee

Yes, my favorite item on this dessert menu…is a beverage. I cannot tell you how good this drink is, you simply have to taste it for yourself. Listen…even if you decide that this restaurant cannot possibly be as good as we have claimed and you don’t want to spend the money to have a meal here, set up dessert reservations and have this beverage. I’ve 100% for certain never had a better coffee beverage in the 37 years i’ve spent here on this planet. It is so good that on our second trip here I didn’t even order something to eat for dessert, I had 2 of these. You’ll see some photos of other desserts as well in the gallery, there was no shortage of items we tried!

Start to finish this meal spread across about two hours and it was a truly memorable experience. If you are looking for somewhere that will appeal to all of your sense and you can share a very well prepared meal with your party and know that all facets of this meal are covered in the best possible way, you need to book reservations at Bern’s. I truly hope someday I am able to walk once more into that dimly lit lobby and wait to be seated for one of the best meals of my life. There is no “Didn’t Suck” rating necessary for this one…Bern’s is an absolute no brainer. Get there!

Check out my TikTok channel for this video as well as many others from all over the globe! – @didnt_suck