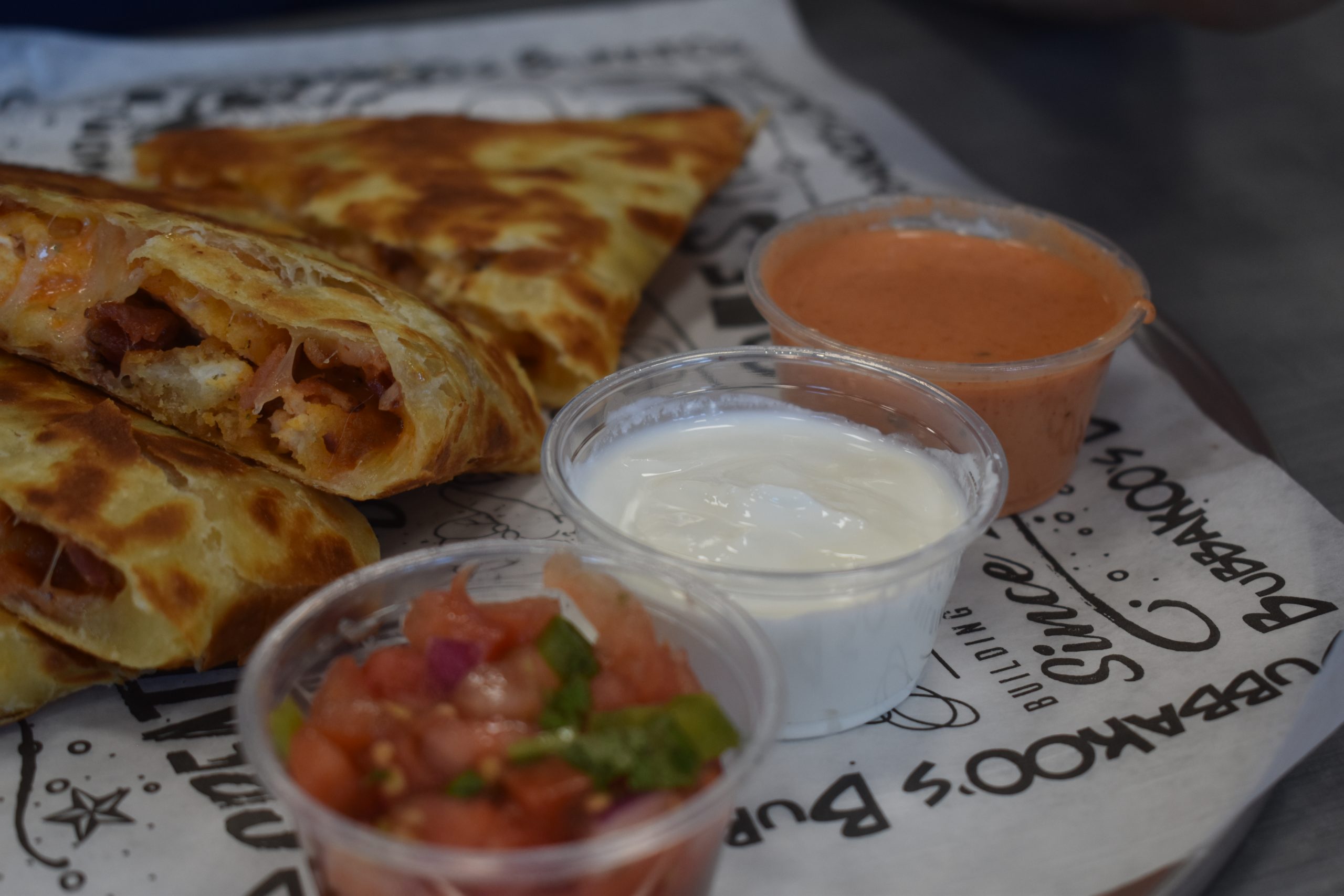 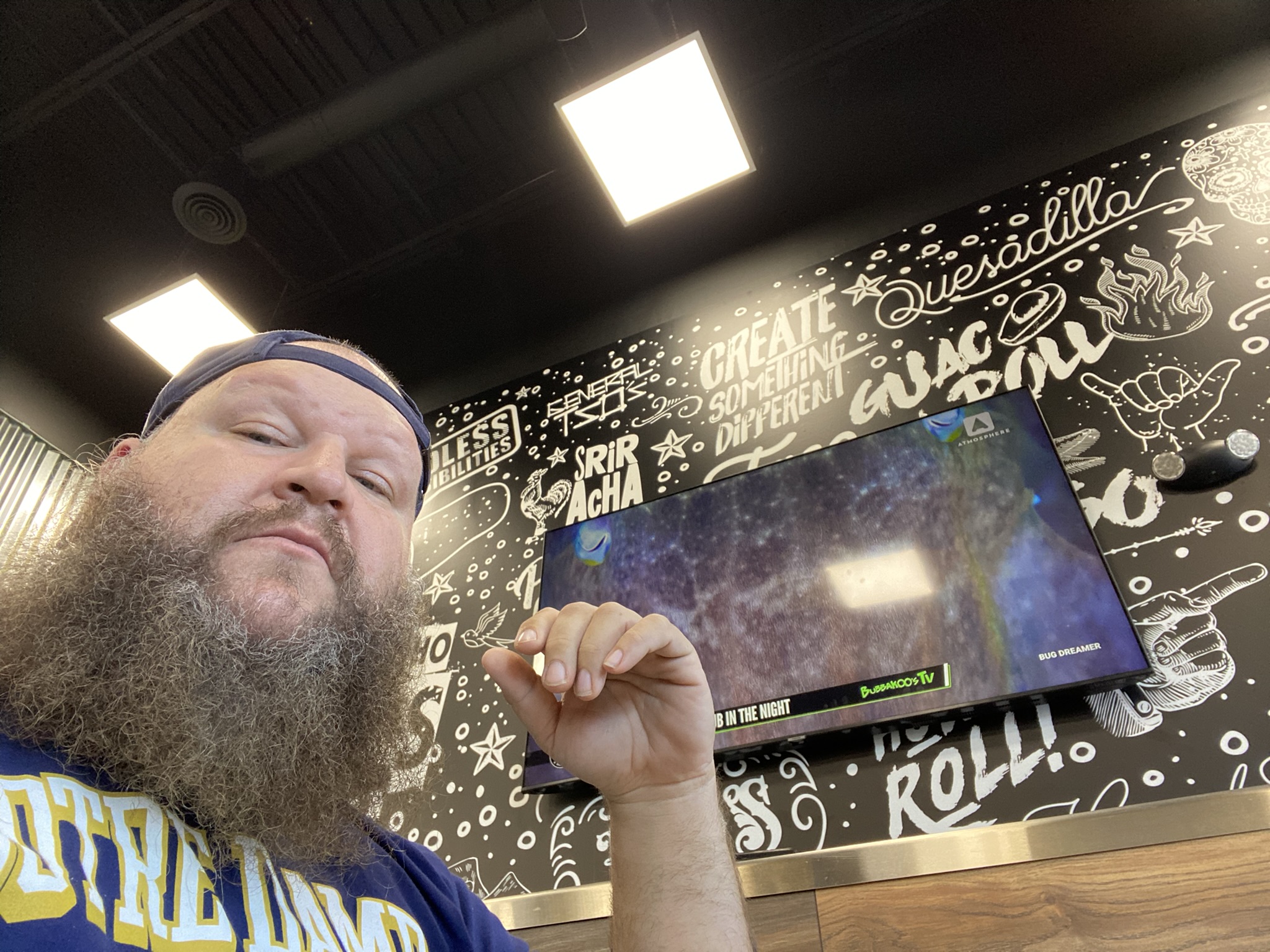 “I’m into Fitness. Fit’ness whole burrito in my mouth”

I was so honored to have received an invitation to try out some of the menu from the brand new Bubbakoos Burritos in Bartonsville, Pennsylvania a day before their grand opening.  I got a chance to sit with the franchisee and talk for a while and he has such a strong desire to please his customers and provide a great workplace for his employees.  I was honestly very impressed with him as a franchise owner (he has a few others in New Jersey as well) and also with his food.

We started with The “Crispy Chicken Bacon Sriracha Ranch Quesadilla”.  No, I did not attempt to say that three times fast.  The first really cool part about this menu item (that I learned from speaking with the franchisee) is that an employee of the company one day tossed this together and said they thought it would sell well.  It then went through the necessary channels and became a menu item across the whole company.  How awesome is that?  To be working for a chain restaurant and having your ideas matter in that type of capacity is not something you see often.  The Quesadilla by the way, was very good.  The chicken was breaded and in fact crispy, lots of cheese, a really nice cook on the tortilla, and the sriracha ranch had a nice touch of heat but nothing anywhere near too much.  I enjoyed this a lot.

Moving on to the “Nashville Hot Chicken Burrito”.  I got this specific item exactly how it would come on the menu and I played around with the next one a bit.  Nashville hot is a big trend right now but I’ve often found that most places that sell it, leave the hot behind.  This burrito had just enough heat that I wanted a drink, but not so much that I needed one.  Keep in mind that I thoroughly enjoy heat though so this one may be a bit much for people who don’t typically eat spicy foods.  Plenty of chicken, rice, and pickles stuffed in this burrito and the tortilla was warmed and wrapped perfectly. *Side note – If you want to see another awesome chicken creation, check out our post from Hash House A Go Go!

After that it was time to try the “Hibachi Steak and Shrimp Burrito”.  I wanted to personalize this one a bit so I had the white rice, black beans, white queso, lettuce, onions, cheese, and some Thai chili sauce to toss the shrimp and steak in.  The flavor combinations were nice, but I think next time I’ll sub out the Thai chili for a different flavor so I can keep trying everything!  The steak and shrimp were very tender, I was impressed by that.  A lot of times at restaurants like this I’ve gotten some questionable steak or shrimp but this was spot on.  All of the toppings were also fresh as well. This was a very good burrito.

Dessert!  Did someone say Dessert?!  How about some Boardwalk Cookies and an Apple Pie Empanada?  The Boardwalk Cookies were fried Oreos that we got some caramel dipping sauce for and they were excellent.  Nice and hot from the fryer and just melted in your mouth.  The Apple Pie Empanada had a really crispy shell and was topped with more caramel and confectioners sugar and it was light enough that it wasn’t overbearing, but still hit that sweet tooth just right.

And now…time for a nap!  Bubbakoo’s Burritos (check out a location near you) brand new location in Bartonsville, PA – Didn’t Suck!