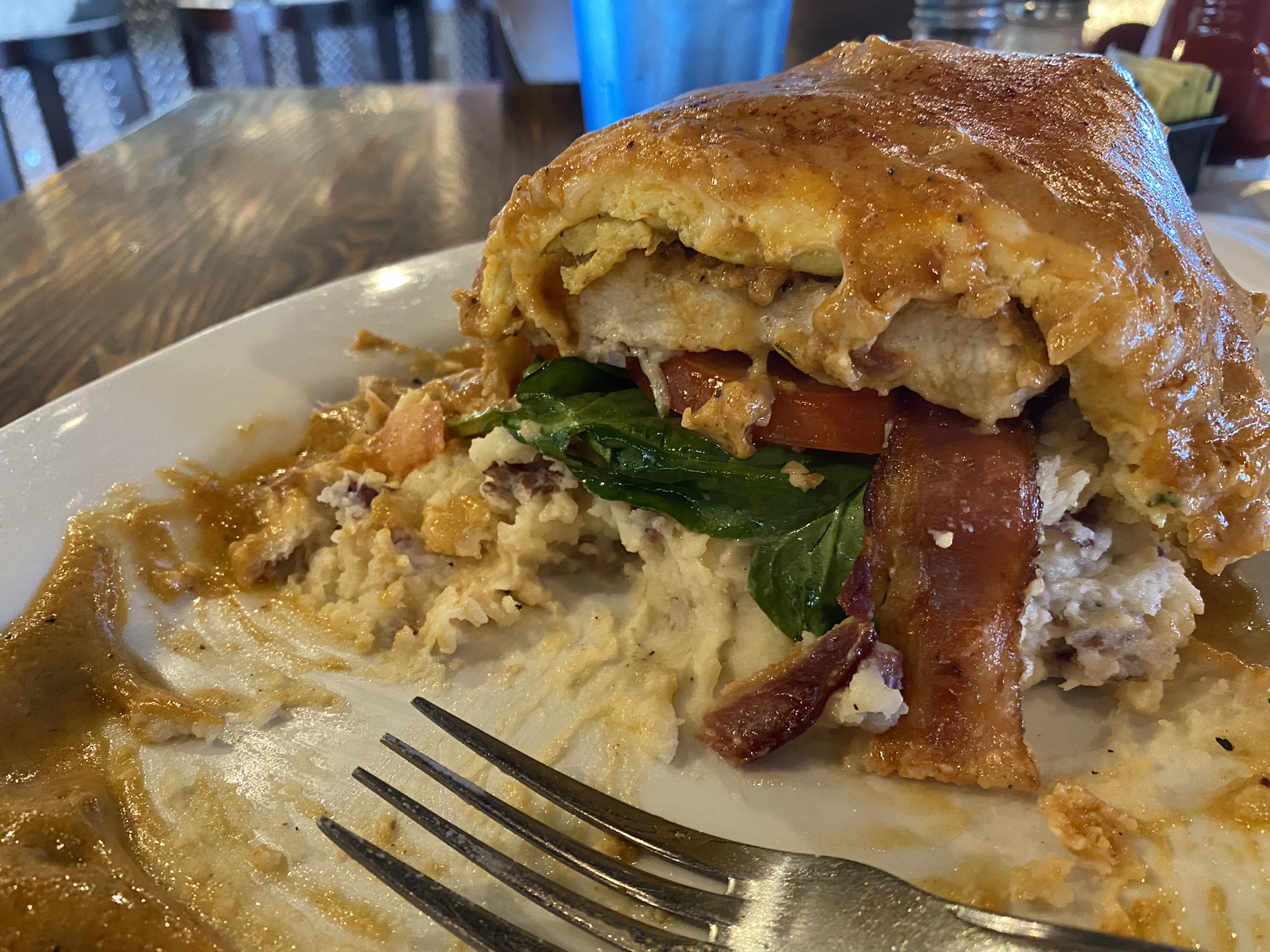 Could Hash House A Go Go be the best Breakfast in Las Vegas?!

I was told on my TikTok channel (repeatedly) that I needed to get to this place while I was in Last Vegas so I made sure to map out some time to check it out. Finding out afterwards that Adam Richman had come here for “MvF” (Man vs. Food – His popular television show that I loved) was just an added bonus! Looking over the menu it was pretty clear to me right away what I needed to try. “Andy’s Sage Fried Chicken Benedict” was going to be the item of choice for my first trip to The Hash House A Go Go.

I have to start by saying, I really enjoyed the coffee here. Some diner/restaurant spots have better coffee than others, and this was one of them. Maybe I was just trying to enjoy the $2 or so I spent on this before my $23 breakfast plate came out, haha, either way, it was tasty and much needed on my first “fully charged” morning in Las Vegas after spending the first full-ish day trying to shake off the jet lag.

So for this benedict dish it was: fried chicken, fresh spinach, bacon, tomato, mozzarella, a chipotle sauce, and scrambled eggs served on a biscuit overtop mashed potatoes. Far from your typical eggs benedict, but it sounded intense and this is an item Adam (Richman) tried when he went so I wanted to check it out. I was concerned that with all these flavors maybe they would pull against each other rather than play together, but I was worried for nothing. This this was excellent.

The chicken was fried nicely and had a good flavor to it. I made sure to eat some of the chicken separately so I could gauge if it could stand on it’s own, and it was a good piece of chicken. If that is the chicken that they use for the “Chicken and Waffles” (and I think it is) then I’m sure that dish is fantastic as well. The bacon was cooked well and had a nice hard smoke flavor to it. The tomato added a little bit of tart and a bit of sweet to cut all the heavier more savory notes. The mashed potatoes were also a solid addition, albeit super heavy, but pulled the dish together even more. I wouldn’t have thought that having an egg dish overtop mashed potato was something that I’d ever really be doing, or want to be doing, but now I want to do it again! Dragging the other items through the chipotle cream and mashed potato made for a really nice bite. I could have eaten this all day (and did since it was so large).

Do not go here if you’re looking for a cheap breakfast, but definitely go if you’re looking to get filled up and have something delicious. I am a big boy and I only ate half and took the rest back to my hotel room. I will absolutely be hitting more Hash House locations (I saw there is one only a couple hours away from me in Jersey) in the future. Hash House A Go Go – Didn’t Suck!